If you don’t mind, I’ll start by telling you a little bit about me – I am a third year journalism student who trained in dance and drama from a young age. Sadly I was not up to standard so decided to pursue journalism instead. So when I listened Georgie Barrat’s keynote speech on how she got rejected from drama school and found herself as a presenter, journalist and broadcaster, my ears immediately pricked up.

Speaking at the University of Gloucestershire’s FutureYou week Georgie shared her story of rising to success in the tech world. She is now best known for presenting the gadget show but also is a freelancers on the side, writing for the likes of Marie Claire, the Guardian as well as being a video journalist for platforms like Carphone Warehouse and Tech City.

She focused her talk on giving specific advice on how to build your portfolio and brand whilst still at university. Tips on how to get your name out there, find mentors to guide you and how to use Twitter to your advantage were all touched upon during her talk and duly noted by the auditorium. I will be implementing many of her tips as my job search continues.

She spoke of her early years in here career, “I look at those years now and I wish I could have told my 18 year old self when I was grieving for the fact that I’d never be an actress, that the effort I had put in and what I had got was really really useful.”

It was reassuring to hear that even someone as motivated and successful as Georgie still had some not-so-fantastic jobs herself at the beginning of her career. Like many other successful speakers from the week, Georgie starting doing what she loved early on. Experimenting with local radio and tv bulletins gave her the confidence and skills to put into practise when jobs came round the corner. 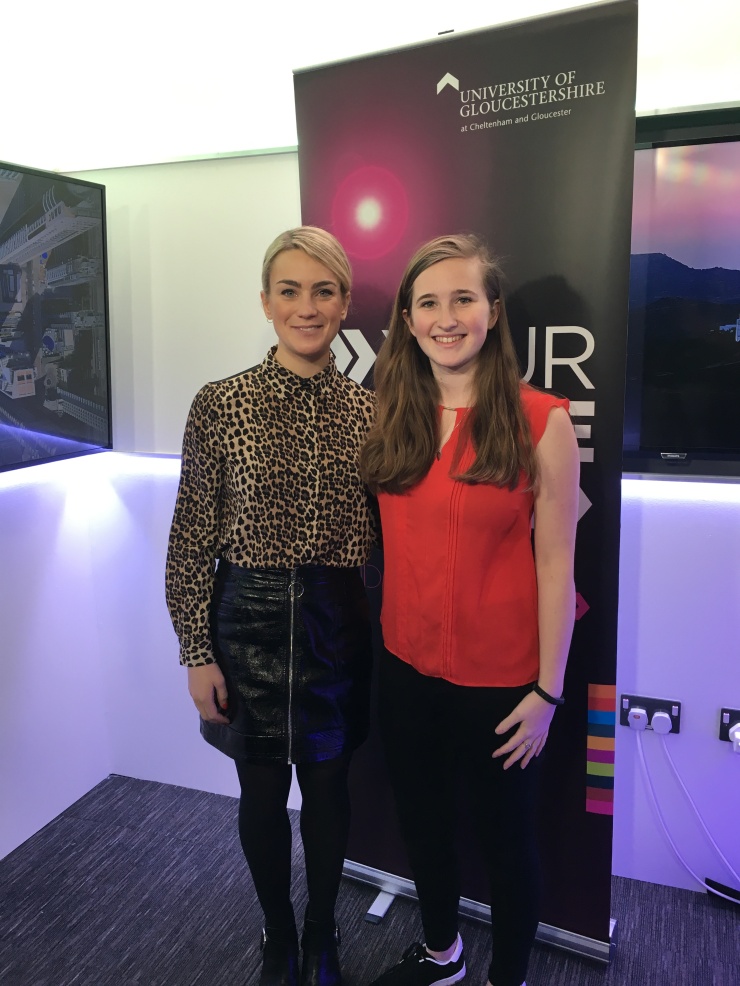 “You need to learn your craft, you need to learn how to work in a professional environment, you need to sort of start somewhere and basically earn your stripes,” says Georgie. “So I say don’t lose hope when you’re in that really crap job and going to work everyday and you’re thinking ‘Oh god I just didn’t imagine this is what life would be like’… Really stick with it and realise that there will be another opportunity in a years time or two years time and you will start to move on.”

As a pioneer for females within STEM subjects, Georgie is passionate about giving women  the confidence to go out into the world. She also pepped talked us students about heading into the scary world of work.

“You have got a bit of a journey ahead of you, it’s never gonna just be a really obvious linear movement that you’re gonna go on,” says Georgie. “There is going to be many stages to your career ladder, some will be off to the side, some you will put on pause but I just want to reassure you that it absolutely will happen for you.”

You can catch Georgie on the Gadget Show on Channel 5 as well as appearing on shows such as ‘Weekend’ and ‘The Saturday Show’.