Alice in Wonderland is not exactly an untold tale. Plenty of cartoons, ballets, adaptations, for both stage and screen have been made over the years. So my thought was, “What’s so special about this one?” With my review I will be answering this exact question, and explaining just how my expectations were exceeded.

This version tells the story of grown up Alice (Kerry Ellis), who is struggling through life as a single mum, when her daughter Ellie (Naomi Morris) follows in her mothers footsteps chasing after the White Rabbit down the modern rabbit hole, an out of order elevator shaft. This gave the performance a modern and refreshing twist.

The story then makes another unexpected turn when the main characters Alice, Ellie and the downstairs resident, unrequited love, Jack (Stephen Webb), stumble across the looking glass and have to decide whether or not to expose the side of them they hide the most. Along with all this they are battling the

tyrannical Queen of Hearts and attending bonkers tea parties. This production goes at the perfect pace to keep all ages interested and to squeeze lots into the two hour slot, including a moral lesson or two.

Some songs were better than others but overall there was a good standard of music created for a show. “Through the looking glass” and “Finding Wonderland” were genuine hits with the crowd. Other numbers weren’t quite catchy enough for me to go home singing but still enjoyed them in the moment nonetheless. 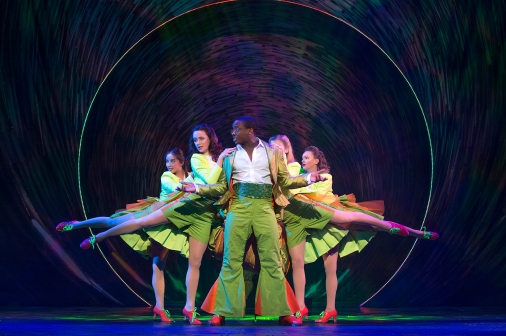 The set was simple, clever and effective, from the towering grey block of flats to the never ending rabbit hole and sloping tea table. The space is filled with the enthusiastic ensemble who were well choreographed by Lucie Pankhurst. The section of tap dancing was a nice little extra which was sadly quickly shut down by “GET QUIETER SHOES!”.

Witty dialogue and retorts between enemies and friends carried the show, keeping us giggling. The real laughter came from the physical comedy from Ellie as she transforms from a ‘Saffy-esque’ well-behaved child to a Harry Enfield ‘Kevin’ stroppy teenager. The Cheshire Cat (Dominic Owen) was also a master of physical comedy and hilarious movement. He took on all the mannerisms of a cat, yet somehow keeping himself entirely relatable.

Each cast member was as strong as the next from Alice herself to the sleepy dormouse who had 4 lines in the whole show. Every character had been developed and allowed to fully evolve before show time. These 360 degree characters were extremely satisfying because of the obvious thought put into every aspect. For me this is the most important element of any production, and mainly why I enjoyed ‘Wonderland’ so much!

Kerry Ellis was the perfect grown up Alice. After playing Elphaba in Wicked she had a natural stage presence and spot on comedic timing. Oh… and a voice an angel would be proud of. Her effortless singing was spine-tinglingly good, especially when paired with the Mad Hatter for “This is who I am” to create the ultimate duo of power and sass.

The Queen of Hearts stole the show, as well as the tarts. Shocking everyone in their seats as the mouthy Mrs Battersby from Coronation Street commanded the stage each and every time she tottered on in her heels and poofy red dress. I was completely unaware of the seriously powerful voice Wendi Peters was hiding in her tiny self.

I had seriously high hopes for the Mad Hatter’s character, as he has always been my favourite. The change of gender allowed more story opportunities, and the adorable uniting of the Mad Hatter (Natalie McQueen) and the March Hare (Ben Kerr). She had the biggest shoes to fill but won the audience over with her looking glass transformation from pigeon toed and awkward to a strutting, hat wearing boss.

I could go on and on with a paragraph praising each and every character and then talk further about how wonderful the production was as a whole, but I think you get the gist. My message is that the casting director should be given a pay rise and everyone (if you like musicals) should go and see this show…