Known all around the world by school children, Joseph and the Amazing Technicolour Dreamcoat marks a pinnacle point in your primary school drama career. Get cast as a brother, one of Potiphar’s ladies, or even shepherd number four and you know you’ve made it. But it’s not just this that gives Joseph the magic it has today. Full of energy, humour and action, it tells the biblical story of “the coat of many colours” in a new and intriguing way, with little pretension and a lot of accessibility. 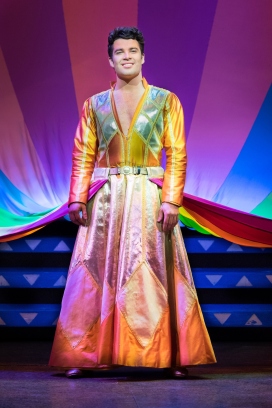 I spent hours as a child watching the VHS recording of Joseph featuring Donny Osmond, driving my poor parents insane. I will try and remain unbiased and attempt not to compare the stage show to the 1999 film but I can’t promise anything.

Joe McElderry, the 2009 X Factor winner has no doubt brought a lot of attention to this show. Often celebrities can bring only a name to a production, but Joe brought so much more. His voice really is incredible, particularly when it is at his purest, like during “Close Every Door”. To illustrate how much I loved this number it actually gave me goosebumps. This song controlled his often flamboyant arms and turned down the smoulder which cast a spell on the Bristol audience, making them scream and cheer at the sight of him. Overall, I thought his performance was strong and he carried the show well.

One of the biggest disappointments for me was the choreography. The brothers and few girls who swapped from character to character could clearly dance well and were capable of much more complex choreography than the step-ball-change and jazz hands they were given. I later realised that it was Henry Metcalfe, who also played Jacob, that choreographed the show. Now well into his seventies it was made clear why the choreography was basic and outdated. He wasn’t a particularly strong Jacob either, with lack of reaction to finding out his favourite son Joseph was “dead” and clearly finding it difficult to physically keep up with the demands of the energetic numbers.

Bristol School of Performing Arts choir sat staggered down the stage and filled the space with their gorgeous tones and perfectly disciplined actions. They subtly accompanied the cast doing their job perfectly. On the stage for the duration of the show, much like the narrator, they were professional in their conduct with not one giving in to temptation to watch the show out of the corner of their eye. 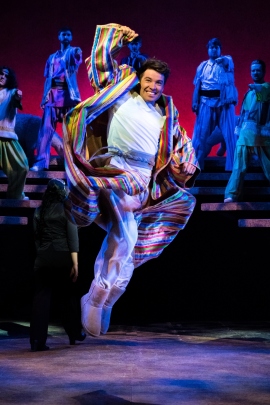 The show didn’t slow in pace in the second half and kept it’s high energy and entertainment value. I did however notice there was often a brother missing from the ensemble which strangely bugged me more than it should. In exchange there was an extra pop song in its place by the Pharaoh/Elvis, yes Elvis, who was maybe given a little too much focus and his jokes overworked a little much.

This musical is perfect for kids as it is rammed full with upbeat music, daft gags and even a moral lesson or two. It may not be the most polished and professional production but it is definitely a care-free night full of fun.